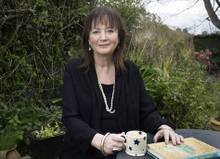 The first thing that catches your eye when you cross the threshold of Marian Richardson’s delightful home in Dun Laoghaire is a tiny, high-heeled Cinderella slipper lying on its side, looking lost.

Judging from the slipper’s size, you might think Marian has tiny feet. But having suggested as much, she replies: “That’s not my shoe – it’s a doorstop!”

Oh dear. Already feeling embarrassed, I notice that Marian is wearing sturdy trainers easily a size or two bigger than the slipper. Yet more blushes.

When I meet her, Marian is supporting herself on crutches, having had recent surgery on her knee to fix a long-term problem.

She hopes to be off them and inside a pair of high heels in time for her next birthday. And, given this doyenne of broadcasting’s track record when it comes to surmounting obstacles, I have no doubt she will turn up to the party the picture of elegance. And I’d bet she won’t be wearing flats.

Marian’s troubles began long ago, mainly through playing sport as a child.

“Over the years, I played a lot of tennis, rounders and, of course, I was always running for buses,” she says.

“I’ve always had dodgy knees, but, just over a year ago, after I got off the Dart, my knee went from under me. I had the most excruciating pain – it was even worse than childbirth. I went from being someone who could run to not being able to walk.”

Following X-rays, her doctor diagnosed osteoarthritis (OA), which is caused by wear and tear on the joints, and affects about 400,000 people – mainly older individuals – across Ireland.

Next, Marian was referred to the Sports Surgery Clinic in Santry, in north Dublin, under the care of consultant orthopaedic surgeon, Ray Moran.

“I’m one of those people who believe Ray is next to God,” says Marian. “He likes to treat OA conservatively, so we tried intense physio to see if it would ease the problem.”

Jenny Branigan, who is the women’s national team physiotherapist at the Football Association of Ireland was drafted on to the case, but she discovered that Marian’s knee was too damaged for physiotherapy to be of any benefit. So it was back to Ray.

Having tried unsuccessfully to sort her out with a special injection into the knee, Ray decided an arthroscopy – a form of keyhole surgery used to treat the body’s joints – would be the course of action most likely to produce results.

The operation saw two small incisions made in Marian’s leg – one to insert the arthroscope (a tiny surgical camera) and another that allowed Ray to scrape away damaged tissue inside the knee.

Experts hoped that, by cleaning out the joint, it would heal. It is a procedure that is successful for many people, but Marian was not one of them.

Four months on, Ray came to the conclusion that there was no option other than a knee replacement.

After a pre-operation checkup to make sure she was well enough for surgery, Marian met with the anaesthetist, who suggested an epidural. While this is a localised form of pain control, it also knocks out the patient.
“I wasn’t sitting up having a cup of tea,” jokes Marian. “In actual fact, I have no recollection of the event, which was pretty hardcore surgery.”

When she woke up, her feet were encased in massage bootees and “elegant anti-thrombosis stockings”.

While Marian was in a good deal of pain, medication was kept to a minimum. But, with a little work, she was soon back on her feet.

“The day after your surgery, the physio comes and you’re out of bed,” Marian tells me. “The staff really make you feel you can do it. You can’t leave the clinic until you can bend your knee at an angle of at least 90 degrees. So, for it to work properly, you really have to be diligent and do your exercises.”

Now on the road to recovery, the broadcaster stayed in hospital another five days. A week after she was discharged, she returned to Jenny for physiotherapy. Her treatment plan included “walks” in the swimming pool and riding a static bike at home.

Probably the biggest problem for Marian was not the pain itself, but the physical inaction and the resulting boredom.

“I felt I could do very little,” she says. “Some people go to a convalescent home, but I had my husband, Michael Good [deputy managing director, News and Current Affairs at RTE ], my two sons, their partners and my gal pals to help me, and they were all great.

“Still, when you’re used to running around, it’s hard to sit about doing nothing. After all, it isn’t cancer and you’re not sick. I took Aine Lawlor’s advice and read a lot of trashy novels.”

Marian overcame her boredom by reminding herself it was for the short term, by telling herself she would eventually get past the pain and frustration that inactivity caused her.

She took inspiration from the trials previous generations had faced, all the while remaining mindful that her quality of life would be much better at the end of this difficult episode.

“Our mothers and grandmothers were in terrible pain [when they had similar problems], but now we have total joint replacement,” Marian says.

When I spoke to her, the journalist was looking forward to a well-earned holiday in Italy, and was planning to bring out the heels and pile on the bling.

And she deserves it, too – Playback with Marian Richardson, her Saturday morning show, has become extremely popular. You might imagine there is a team of researchers behind the programme, but you would be wrong: it is just Marian and no one else.

“It’s a one-woman operation,” she says. “You look and listen, and then decide on the clips. After the show, I will be gearing up for the next week’s show.”

It’s not just that Marian’s had a terrific career – it started when she was 14 with a part in a production of Ibsen’s The Wild Duck, then moved on to presenting, producing and reporting on a host of topics from the fall of the apartheid regime in South Africa to the inauguration of Barack Obama as US president – it’s that she’s a true all-rounder, a supremely gifted broadcaster and, if you’ll forgive the pun, a lovely woman to boot.

The Brainstorm Long Read: understanding the pattern of Anterior Cruciate Ligament injuries is key to managing the risk for players at every level. This article by Aoife Ryan-Christenson was published on RTE’s Brainstorm in September 2019. “I heard the pop and then when I fell, I tried to move it. Then I heard the crack […]
Read more

Dr Barry Sheane, a Consultant Rheumatologist at  Sports Surgery Clinic, joined Dave Hooper on Shannonside Radio to discuss what people can expect at SSC’s Public Information Meeting in the Hodson Bay Hotel on Monday, February 10th. Click here to listen to the interview in full Dr Barry Sheane will be joined in Athlone by the […]
Read more

In this interview with Melbourne based Radio Station, SEN Breakfast, Dr Andy Franklyn-Miller, Director of SSC Sports Medicine, discusses SSC’s unique approach to rehabilitating hip and groin injuries and how SSC can assist clubs in return to play of injured players. Click here to listen to the interview For further information on hip pain or […]
Read more