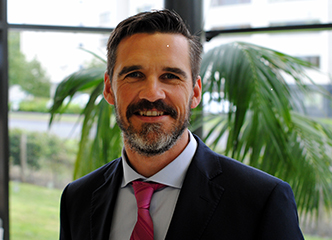 Gavin is originally from Tyrone where he completed grammar school at the Christian Brothers in Omagh and obviously maintains a high level of support for his native county’s GAA achievements. He then completed his undergraduate training in Trinity College Dublin and subsequently his internship in the AMNCH Tallaght.
He went on to Basic Surgical Training in general surgery, orthopaedic surgery, vascular surgery & plastic surgery in 2003-2005 and at this point realised his interest lay in the field of orthopaedics. He completed his Doctor of medicine thesis in  2006 – 2008 and worked as clinical tutor in both the Royal College of Surgeons & the Health & Human performance department in Dublin City University at this time.
He entered Higher Surgical training in Trauma & Orthopaedic surgery in 2009 – 2015 and this included a year’s Fellowship training in Christchurch, New Zealand.
He is married with two children. Apart from spending time with his family, his hobbies include weight training, hiking, cycling & skiing and he has travelled extensively throughout Europe, North & South America, Africa, Asia & Australasia.
Gavin is committed to providing the highest level of care for his patients in a friendly and down to earth manner. Whilst his areas of interest include soft tissue knee reconstruction and Hip and Knee Arthroplasty, he is particularly interested in knee navigation for both unicondylar (partial) and Total Knee Replacements.

Due to the ongoing situation with COVID-19 in the community, all visits to
patients have been suspended with immediate effect.

This decision has been taken in the interest of patient safety and staff
safety, which remains our primary concern.

DROP OFF AND PICK UP

Patients attending for admission or out patient appointments should only
be dropped off and collected. Children are not permitted unless attending
as a patient.

Those requiring assistance may be accompanied by one person.

We thank you for your cooperation and understanding.

At this time, we must all work together in the national interest.

If you answer Yes to any of the following questions please contact your consultant’s secretary / relevant department to reschedule your appointment.

Anyone who has been to an affected area in the last 14 days AND is experiencing symptoms should phone their GP for advice. Symptoms associated with COVID-19 are cough, high temperature, shortness of breath and difficulty breathing.