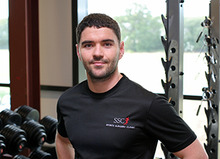 Home > News > Good technique in the gym is essential for training

Good technique in the gym is essential for training

Injuries come with the territory in GAA. The statistics from the National Injury Database give us staggering numbers to remind us of this. On average, this season, 2 out of every 3 players on your team will get injured. Over a third of your team will have more than one injury this season and up to a quarter of all injuries will have been suffered before. Of these injuries, the vast majority will occur to the lower limb.

In the Sports Surgery Clinic, we rehab a large number of these injuries across both codes and at all levels. Many, if not most, of these players have put in the hard yards in pre-season to get stronger and get fitter. They have followed their Strength and Conditioning plans diligently and are still getting the same niggles they’ve always had. But why is this? They are bigger stronger athletes. Stronger muscles, stronger connective tissue and stronger bones.

Let’s use a hamstring strain as an example. Imagine there is something in the way you run that places extra load on your hamstrings like a large anterior tilt of your pelvis (pictured). You then just work away to make your hamstrings stronger as you believe them to be weak. The mechanism of the injury, the pelvic tilt, is still there so you continue your running technique that overloads your hamstrings. You build up some more training load and the hamstring strain comes straight back because strengthening the tissues will only take you so far.Let’s then say you’re an uninjured athlete, but you run in the same way. The forces you are putting through your hamstrings at the moment aren’t yet enough to cause you pain. So let’s change a couple of things. Your club management wants to up the ante this season so you have an extra conditioning session, small-sided games say, in the week. There’s a nice bit of extra training load and more running with your poor technique.

Let’s also get you in the gym and up your strength, so every sprint and acceleration enables you to produce more force and therefore place extra load on your hamstrings. You are now on the National Injury Database.

Anytime you’re adding load to poor inefficient movement you’re asking for trouble. Ensuring good technique in the gym will help translate to your matches and training. It’s the perfect place to do it too as it’s a very controlled environment, there are no excuses.  Even exercises that seem unrelated can reinforce good, or bad, habits. The chin up or press-up (pictured) can add to that anterior pelvic tilt, if performed badly. Use them as an opportunity to address whole body positioning.

A selection of photographs from our Educational Evening focusing on Orthopaedics and Sports medicine which we hosted in the Amber Springs Hotel, Gorey.
Read more

A selection of photographs from our Running Injuries & Performance Symposium which was hosted in SSC Sports Medicine in November.
Read more

A selection of photographs from Sports Surgery Clinic's Public Information Meeting in Monaghan in conjunction with The Blayney Blades.
Read more

A selection of photographs from our Educational Evening for GP's and Physiotherapists focusing on Orthopaedics and Sports Medicine which we hosted in Galway.
Read more